in 3 easy steps we will have you well on your way to getting the financial deal to suit you.

Following on from our last update on electric motorbikes, this week we’ve found some interesting stories about flying motorbikes and self righting motorbikes.

But first to Vietnam, where motorbikes have become such a popular mode of transport there are now more than 33 million of them in the country, which has made the country a haven for motorbike thieves.

A small tech company in Ho Chi Minh City called Setech Viet may have come up with an answer – an inexpensive device that allows you to ‘text’ your motorbike if it goes missing. Called the S-Bike Pro and costing about $75, the device has a SIM card in it which can receive text messages.

When activated, the S-Bike can whistle, turn off the bike or send GPS coordinates with a Google Maps link. Of course it won’t be long before enterprising bike thieves have found a way around the device, at which point Setech Viet may have to release the S-Bike 2.

The photos of a prototype flying motorcycle being developed by a Chinese farmer from Jinan Province do not exactly inspire confidence, although the inventor claims he will make his first test flight soon. The bike is based on a Chinese made ‘Battle’ motorbike, with a PVC and plywood airframe. 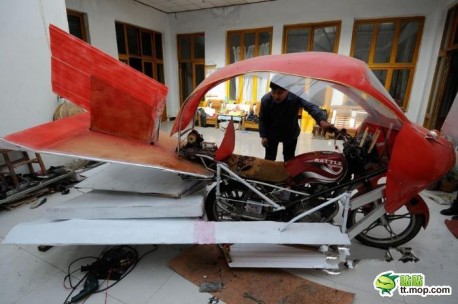 The vehicle weighs in at 470kg and is designed for everyday use, with a propeller at the front and foldable wings. Expect to see the ‘motorplane’ (or maybe ‘airbike’)  on sale in Australia in a few years time. Or not.

Bike Finance For A Self Righting Motorcycle?

Here’s what you might be getting motorbike finance for in a year or two: a young entrepreneur in the US, Daniel Kim, has invented a self righting motorcycle which, when fully developed, will be capable of withstanding the impact of a truck (a Ford F-150) travelling at 55kmh.

Kim grew up in Vancouver in Washington State (not to be confused with the Vancouver in Canada), the son of a dentist and inventor father and teacher mother. It was while working in a garage that he came up with the idea of a safer motorbike, after he was nearly crushed underneath a car he was working on. He put his arm up as the vehicle fell on him, and the force pushed the rolling sled he was lying on out from under the car, which saved his life.

The motorbike, called the C-1, uses two stabilising gyroscopes, each 30cm disc weighing 18kg. The two discs spin in opposite directions at anything up to 12,000 rpm and counter tipping forces. Where previous designs for stabilised vehicles have only used one gyroscope, the two make this new design very stable indeed.

The new bike will also be enclosed, with steel reinforced doors, seat belts and an airbag. After ripping bikes apart when he was younger, Kim studied architecture for a short time, before swapping to industrial design.

It was while he was here that he worked on a project being run by a team from MIT to build an electric bicycle, where he saw the project leaders market the product to big business, inspiring him to take the same path with his invention. The plan is to have the bike ready for market in 2014 and to sell it for around US$24,000. He has already raised US$1M from investors and is looking to raise a further US$5-10M to take the product to market.

He is already in negotiations with four car and truck manufacturers to use the technology in their vehicles.